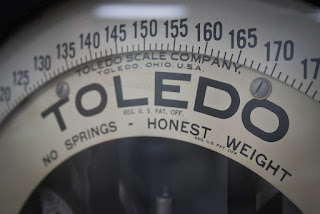 I’m down a bit more than 13 pounds since I decided to lose weight at the end of May. I’m between notches in my belts and my pants tend to fall, especially on the right side, where I carry my wallet. I don’t need new clothes yet but I probably wouldn’t buy the size that I have now if I were buying them today. My ring is looser and I may have to move it to a different finger or buy a ring guard.

It started when I gave up doughnuts for Lent.  That was about the time that I went online to learn how many calories I need to maintain my weight, based on my age and gender and activity level. The sites that I consulted all estimated my daily intake at something around 2,600 calories, which is ridiculous.

From there, I found a top-rated calorie tracker app for my phone. I don’t want to feel like an infomercial so I will keep the name of the app to myself, but you can ask me if you want to know. I set a plan to lose weight at a healthy rate, the recommended one-to-two pounds per week over several months. That meant cutting my intake to 2,200 calories per day, still over the one-size-doesn’t-really-fit-all 2,000 calories, but these things require baby steps. I didn’t gain it all in a day.

Posts about my weight, which I am not going to publish, are more personal than most of what I write here, but perhaps you will find something in this post that helps or resonates with you. I have learned some important things along the way so far.

This is not a diet, which to me is a sudden and acute and uncomfortable and unsustainable change in food consumption and/or activity. I don’t want to lose weight and buy new clothing and then be miserable when I put the pounds back in six months or a year. I don’t see a point to that.

Instead, I’m working on a change of habits and a change of lifestyle. I want a new way of eating and moving and thinking about my body. I have gained 30 pounds since starting my doctoral program, a PhD being bad for BMI, and that doesn’t include the 7 pounds that I attributed to sleep apnea.  My goal now is to be 40 pounds lighter than when I started the doctorate. When I am there, with habits that sustain that weight, then I won’t even consider the old ways of eating and moving and thinking.

Doughnuts are a good example. I broke my Lenten fast a few days after Easter but that was the last doughnut that I have eaten. It’s not that they are evil. Doughnuts are good. The problem is that eating a doughnut means spending something between 250 and 400 calories out of my daily budget, about a meal, and for that I get a lot of salt and a short carbohydrate rush that will fade and leave me tired and unhappy.


Working from a budget

For the most part, I’m still eating what I used to eat, just less of it. That may change, too, when I’m ready. The app breaks down my diet by macronutrients and my percentages are not what experts generally recommend. I’m still eating more carbohydrates and less protein than I should, which is typical.


The American diet is ridiculous

If any country inflicted on Americans the diet that we inflict on ourselves, we would declare war on that country. The number of calories that are available to us, in terms of low cost and low effort, is incredible, and many of them are not from good foods.

The best book that I have read on the topic is called Sugar, Salt, Fat: How the Food Giants Hooked Us by Michael Moss (2013). The food manufacturers study natural human cravings and tolerances for sugar, salt, and fat, and they build foods to appeal to these cravings, within our tolerances, to keep us coming back. It’s not a conspiracy or a plot, just business making money by selling us what we want, which is often not what’s good for us. It’s our fault for knowing less about what we want than the companies that sell it to us. Would you trust a fast-food company? What kind of unholy crap must be in something that a store can sell for $1.00 and turn a profit?

I still love the spicy chicken at Chik-fil-A, but I know that it costs me 500 calories. Yes, I also love the waffle fries, but they cost another 400 calories, so I either save them for last, when I have my 500 calories of spicy chicken, or I eat a few fries and then throw the rest away. That’s wasteful and I don’t like it, but compare the price of any combo meal to the price of the components when bought separately. The meal is always cheaper, so what is this for-profit company getting from the discount?


Exercise is not enough
Exercise is important but I’m seeing it as parallel to diet. It’s not possible to work off the calories. My calorie tracker is now linked to the app for my FatBit, so when I exceed a certain amount of activity on a given day then I get a discount against my budget. On 8/29, I walked up and down a steep hill after work. I took 10,574 steps and climbed the equivalent of 36 floors and exercised for 58 minutes, between that hill and just moving around from home to work to park to home that day. That effort earned me a discount of 452 calories for the day. I could have wasted 35 minutes of walking up a hill by eating a single doughnut.

Check the calorie counts at restaurants. It’s easy to pack away 1,500 calories just on dessert. You can eat more in 15 minutes than you will burn all day. A combination of strength training and cardio is important, will make you healthier, but it’s not possible to lose weight with exercise alone, and you can trap yourself by thinking that you “already burned off” something.

Weight fluctuates every day, so I only step on the scale about once every two weeks. It took me five years to gain the weight that I plan to lose in six months. I’m seeing enough of the changes – a little cooler in the heat, a little faster on the steps, a bit more active during the day – to tell me that I’m moving. I’m still doing what I did in early May, just eating a bit less and moving a bit more and adjusting my goals as I go.