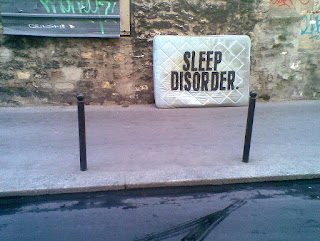 I have sleep apnea. The most common symptom of the disorder is snoring, which is bad enough if you want to share a bed, or even a bedroom, with someone else.

However, not everyone who snores has sleep apnea, and snoring is not the worst of the many bad parts of sleep apnea. Apnea means that I actually stop breathing when I sleep. I can’t observe it happening but I recall how it was for my father to sleep and I infer that my experience has been similar. He would fall asleep and breathe normally, slowly and deeply for a few minutes, but as he fell more deeply asleep, the muscles around his airway would relax and constrict the passage, and his breathing would become more and more labored and desperate until, finally, a long silent pause, as he stirred slightly, not fully awake, and restored the tension in the muscles in his airway. He would get a few good breaths, relax, fall back asleep, and start the whole process over again.

Even a typical person, without diagnosable sleep apnea, may experience as many as 5 apneas per hour. When I finally had my sleep study done in March, I was averaging 22 apneas per hour. That means that I was getting about 3 minutes of sleep at a time, probably less. By the way, 22 times per hour is only moderate apnea. Severe apnea starts at 30 times per hour. If you wonder if you have sleep apnea, there are questionnaires that you can fill out to help you to decide if you need to see a doctor but my attitude is that if you are wondering about it then you should talk directly to a professional, rather than Doctor Google.

In June, before I started treatment, I was nearly falling asleep in traffic, if I had to wait at a long traffic light or in a jam or detour. I never actually crashed, in either sense of the word, but the Centers for Disease Control and Prevention estimate that 100,000 car crashes resulting in 1,500 fatalities per year are linked to falling asleep while driving.

I also never fell asleep at my desk but I was certainly in danger of it and learned to prevent it with a mix of caffeine and snacks and walking around. Falling asleep at work is usually treated as a disciplinary matter and a person can be fired for it.

Sleep apnea also increases the risk of heart attack and stroke by 66%. It can aggravate high blood pressure and diabetes.

Sleep apnea also causes depression and it interferes with memory recall. I’m a doctoral candidate in educational psychology with a dissertation in working memory, so I am especially sensitive to my own memory capacity and terrified of becoming unable to remember information. My work, my world, is in my head. My ability to retrieve information stored in long-term memory is faster and deeper and more accurate now than it was before I started treatment for sleep apnea.

I mentioned caffeine and snacks. I used to have a routine of stopping at Wawa every afternoon to slam down a few hundred calories of chocolate milk and some Tastykake product. Interesting that sometime after June, I just stopped doing that. I don’t recall when I began to keep driving. 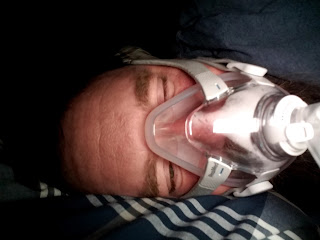 I stopped the afternoon snack stop after starting on a CPAP (continuous positive airway pressure) machine. These scare a lot of people and I was scared enough to delay the diagnosis and treatment for years after I was sure, based on expressions of concern from others and my own sense of my condition, that I had sleep apnea.

A CPAP machine, smaller than a shoe box, blows air through a hose and into a mask that I wear. The machine is very quiet. It has a reservoir that I fill with distilled water for a comfortable and adjustable level of humidity. It senses how much air I need and it adjusts the pressure. It also has wi-fi and it broadcasts a report about my sleep – hours used, mask leak rate, apneas per hour, how many times I removed the mask – to my insurance company, my sleep doctor, the machine’s manufacturer, and the company that supplies my home medical goods. Patient resistance to CPAP machines is so common that my insurance company will stop paying for it and take it back if I average less than 4 hours of use per night. I check my sleep data every morning and have calculated descriptive statistics, including a Pearson r between my leak rate and apnea rate (.61 for you geeks).

I have had problems with finding a mask that fits my not-quite-medium, not-quite-large face well enough to get a low-enough leak rate to maximize my sleep therapy, but I have never had claustrophobia, even though I use a full-face mask. The sound of my own breathing through the hose and the mask is a sweet lullaby to me. It means that, tonight, I will breathe easily, all night, instead of suffocating. After I became sure of my condition, before I received the CPAP machine, I truly hated sleeping. I was terrified. I have used my machine every night since I received it.

I’m not going to publish my weight, but I have lost 12 pounds since the summer. As I wrote earlier, that afternoon snack stop and the 400 or so calories that I was slamming down to stay awake during my afternoon commute, all of it, is gone. From time to time, I make another cut, experimenting to find out how few calories of what kind I need to keep my mind and body running. I haven’t hit the bottom limit yet. During the day, more and more, I’m burning sleep rather than carbohydrates.

This gets me onto the topic of spirals. Obesity and sleep apnea are a spiral, existing in reciprocal causality, each aggravating the other. Throw in the depression – mild, more dysthymia than major depression – that comes with sleep apnea and it happily joins the death spiral. Food keeps you awake but adds to your weight and makes you feel badly about your body and so you act like someone who doesn’t feel good about his/her body and so you are less active and who cares if you stop for Tastykake Dreamies (I’m not even making that up – that was my poison of choice – check it out).

One of my favorite movies is Heartbreak Ridge. Clint Eastwood is Marine Gunnery Sergeant Thomas Highway at the end of his career and assigned to a recalcitrant reconnaissance platoon. In one of his first encounters with the younger Marines, he orders them all to get high-and-tight haircuts. “When you look like Marines, you’ll feel like Marines, and pretty soon, ***damnit, you’ll start acting like Marines,” (Eastwood, 1986). Sergeant Highway probably would have sneered at Cognitive Behavior Therapy, but he was practicing a lay version of it. How you act changes how you think changes how you act, or, how you think changes how you act changes how you think. We can intervene at either thoughts or actions, usually both at the same time. Any weakness in that spiral is a good target for intervention. We turn it around and make that death spiral into a life spiral and make you work for yourself rather than against yourself.

As for me, well, in for a penny, in for a pound. Since June, I have been willing to take on other health problems and turn them around. Call that phenomenon sunken cost, the same tendency that causes a gambler to put more money into the slot machine after losing $20.00 already because now it must be close to paying off. Yeah, it’s the same thing, only I have it working for me. I was willing to go through the challenge and the hassle of getting and using a CPAP so what other investments in myself reasonably follow from that? I’m looking for other spirals, in my life and in my environment and looking to spin them in the right direction.