The challenge of spring and Lent 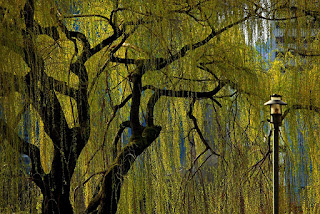 I know that it feels like a welcome relief from winter, but for me, the energy, and urgency, of spring make it probably the hardest time of the year at work. Winter is slow, plodding, predictable but spring is different from one minute to the next. Moods swing and hormones fly. Minds and bodies and routines change every day.

One of my specialties is suicide assessment and prevention, and suicide rates increase in the spring. Psychologists are, of course, divided about why this is, but I agree with one of the major theories, that the burst of energy that naturally comes in spring makes death possible. There are many powerful physical and psychological impediments to killing and dying. Neither is easy. It takes much work to kill a person, yourself or another. The power of spring is not always used for growth and good.

Steel wool for the soul

I find that I run into personal, spiritual challenges during spring and Lent, too. It’s almost as though God lifts that shield around me a bit, lets a bit of malice creep in, reminds me of my dependence on God and invites me to move a bit closer to the light, away from the dark. It is steel wool for my soul.

I had my first encounter with the “Momo” suicide trend a few weeks ago, and as I talked through it with colleagues, contending with a palpable sense of evil, several of my conversations focused on the role of the will. Darkness comes when it has been invited and it’s easy to be sure of your answer until you are actually asked the question. You don’t know what you will do until you have to do it. I’m not talking about the bad things that happen to us. I’m talking about the bad things that we do.

This year, I gave up doughnuts for Lent. My weight has more to do with working at a desk during weekdays and working on my dissertation nights and weekends than it to has to do with doughnuts. A PhD is bad for your BMI, but doughnuts surely were not helping. I have been in the near occasion of sin, been in tempting situations, a few times, but walked away safely. For awhile, I think that I was substituting cookies for doughnuts, that being the whack-a-mole nature of temptation, but I caught that and have stopped it. There is a tradition of allowing breaks in Lenten promises and sacrifices on Sundays, but I was eating more doughnuts on Sunday than on any other day, and I decided that it would be easier to abstain completely than piecemeal.

My sense of a suitable Lenten sacrifice is to bring me closer to God by moving further from a competing and false god. Doughnuts aren’t evil but neither are they food, more correctly a form of entertainment and, sometimes, an analgesic. It’s not that I am afraid of what God will do to me if I eat a doughnut. This was my idea, not God’s, and if I break my promise then God forgives me in the same instant. Any harm done is a natural consequence of the choice rather than punishment. Doughnuts are both their own reward and their own punishment.

Do we know what we are doing?

In fact, many bad choices go unpunished, or without immediate and predictable bad consequences. If you are a smoker, wouldn’t you love to know which is the exact cigarette or the pack that pushes you into emphysema or cancer? Then you could stop just before that one. I used to smoke pipes and small cigars and I miss it, but I also remember all of the details of my first asthma attack. That was a gift and a blessing. I haven’t smoked since then, and though I still have a rescue inhaler that I refill annually, just to keep it available, I haven’t puffed on that, either, for ten years.

Bad choices rarely work that way. Maybe we find ourselves in a situation that we never expected, or this time in a familiar situation we decide to “be just a little bad” and it’s exciting and fun and we aren’t hurt, so the next time, it’s easy to do the same again and maybe go a little further.

We invite and are invited. Good and evil rarely come roaring at us with irresistible force and major events rarely happen all at once. We make choices in the short-term with no way to know the consequences in the long-term. We both do and do not know what we are doing. That’s the human predicament and it’s a hell of a thing.

That is how bad things happen, but I will suggest that good things happen through the same process. One doughnut doesn’t make you fat any more than one long walk up a steep hill makes you fit. Where is the line when you save yourself? How can you know which will be the last snow of winter?

Spring is a powerful, urgent, dynamic time. I don’t look forward to Lent and God taking steel wool to my soul but I know to expect it, and I am grateful to emerge on the other side, in the warmth and light of the victory of life over the law of sin and death. Until now, I thought that God was punishing me. This year I finally realized that God custom-built me for taking on ridiculous challenges, which make me feel alive and make me useful in this world.  Lent is for me and for my connection to God.  Spring is the reassertion of life.

Lent is nearly over and the grass is growing. The snow is gone for awhile. I’m ready to use the energy to take on the urgent work of building, of life.