Suicide prevention, and the shock of the sunrise 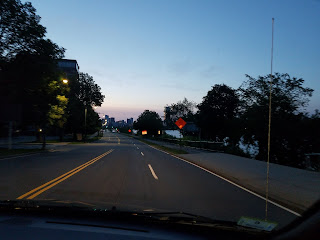 There are times when the dawn comes as a shock, welcome to be sure, but a shock all the same. It’s a time of safety, though I suspect that it’s also a time of danger, too, but we will come to that.

I’m an educator so I am used to waking before the sunrise, and it usually means that my work is about to begin. Today it meant that my work could end. I was volunteer staff for The Overnight: Out of the Darkness, an event to raise awareness and funds for the American Foundation for Suicide Prevention. My job started at 4:00 PM yesterday. Sometime around 6:30 AM, we came off the line.

I was half of a sweep crew, rolling through Boston in a minivan in support of the walkers on their 15.9-mile journey. We were all color-coded with t-shirts. Walkers wore green. Yellow meant logistics and support, gray meant staff, orange meant safety, and red were medical. I was a purple, participant support. I came to provide mental health support.

This has been become a specialty for me, something that has just happened, but it fits with my volunteer work in disaster mental health, and tonight I used some of the same methods. For the psychology geeks out there, I worked mostly from a model of Psychological First Aid with some elements of Mental Health First Aid. I listened when I could, taught when it was right, and did no counseling at all. In contrast to the psychology geeks, for the normal people who might be reading this, I walked around and checked in with anyone who seemed to be alone or having a hard time. I focused on the physical level, because the mind and the body can raise each other up or drag each other down. I did none of the stereotypical retrospective stuff, never once asked anyone how they were feeling. We talked about strengths and goals and taking the next step.

I came to Boston and I made myself useful, or at least I hope that I did. I also practiced some skills that I use several times every year, and maybe use in smaller chunks all of the time. I’ve slept for 4 hours this morning, felt like a blink. My body is tired and there will be naps later. My introvert battery is on E, too. If the fuel gauge on my RAV4 looked like my Introvert Gauge, I’d be coasting on hills with the windows up and the climate control off, heading toward a Wawa on a route with minimal traffic lights. There’s at least as much truth in exhaustion as there is in wine, though, so it’s worth pondering. Let’s see what we can learn from this.

One of the lessons from the overnight is that the pain dulls but it never disappears. The event includes luminaria, and I recorded a few brief video while walking along a wall, and another video from the stage, and the dates struck me. Some of the people at this event lost loved ones to suicide five or ten years ago or more and it still hurt enough to walk almost sixteen miles from dusk to dawn, to feel that pain again in the hope of sparing others the same. Yes, this is normal, nothing at all wrong with it, a good example of approaching a loss to learn more from it, make more peace with it, but I am thinking that I want to show that video to the children whom I will assess for suicide risk in the coming school year. They are one of my reasons for being here.

When I say children, that’s what I mean. The stereotype is that suicide is just a teenage problem. I have assessed and recommended urgent interventions for children as young as six years old. I know that there are suicidal kindergartners out there, and that they understand what death is, as much as anyone does, the permanence of it, not like a video game or a cartoon, and many of them have realistic ideas about how to do it.

For the survivors, the pain dulls, but it never disappears, and satisfying explanations for the reasons why never come. Sure, I can say here that the current research says that suicide is rooted in a feeling of hopelessness, even more than depression, and that’s a tool for professionals, but it’s not my introduction to a grieving family. It’s not going to make sense. No reason will make it better. Would anyone even want there to be a good reason to kill yourself? Where would that leave us?

I shared the overnight with people who lost loved ones to suicide long ago, and I watched a few walkers band together to support a young woman who joined the walk spontaneously. The route went by her apartment. Her boyfriend killed himself a few days ago. God bless them for accepting and including her tonight. In the window of a Dodge Caravan on a dark street in Boston, I gave the walkers a few ideas for how to help this person. That’s the job that chose me.

We had window chalk paint, and we decorated the minivan to identify the van for the walkers and to raise awareness for other drivers. I put a blaze-orange semicolon on the back window of that black Caravan, probably the best that a Dodge Caravan has ever looked. The semicolon is the symbol of suicide prevention, because a writer uses a semicolon when he could have ended his sentence, but chose to continue instead. The semicolon means that life continues. I’m probably ready to add one to my tattoos but it would be ten minutes of work, far below a typical shop minimum, so it will have to wait a bit.

Sometimes the sunrise is a shock, the certainty of life and its insistence on continuing. Death comes, but we say, “Not today,” and we continue. The hazards and hiding places of the night end and the streets are still quiet, and we can relax, perhaps a bit too much, and that’s the danger, that we can forget where we are and what we are doing.  The light comes and we welcome it, but there is still more work to do.