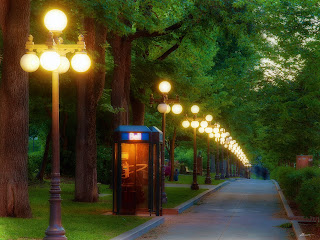 
I just ordered a copy of the complete series of “Miami Vice.” If you are laughing, that’s fair. I’m probably going to pass out laughing at the sight of Dan Hedaya in purple parachute pants, and I’m wondering if remembering that image is really the best use of my memory. Frank Zappa plays a character who keeps talking about “weasel dust.” Again, I could probably use that memory space for better purposes, like polynomial regression.

Whatever you might think of the series, the actors and themes and music were a good representation of some of what was happening in America during that time. The show was influenced by, and came to influence, the culture.

Something about the purchase is stirring up stuff for me. It has me wondering why I would want something associated so strongly, at least for me, with high school and college.

When I graduated from high school, I wanted nothing to do with my hometown for awhile. I spent two years in college in California, then two more in Northeastern Pennsylvania, then four years in Richmond, Virginia, then a summer near Utica, New York, totaling about eight years when I was never home for longer than a month. My brother, Tim, was almost five years younger than I was, and when I attended his funeral, in July 2012, I learned some things that I never knew about him. I wasn’t around and didn’t know much about in what was happening in my hometown when he was in high school and much of his time in college.

I burst through the double doors and had an adventure after high school. When I came home, in 1995, it was out of necessity at first, having run out of money and ideas, but I could have left again. I could have, but I didn’t. I was away for part of 2012 and part of 2014 but I came back, eagerly, each time. I’m still having an adventure but I know that I want to stay where I am for at least the foreseeable future. It didn’t feel like home until I left.

When I think about the era of my life associated with this purchase, which by the way really is just a television series, I don’t feel the feelings of that era, but there some things that I know to have been true. This will not be easy to write but it might make sense.

So what is it, apart from the music and pastels that has me buying a series from a time when my life was like that? I have this curious, sunny and breezy vibe, like one of those hot spring days when the wind keeps shifting and the sky is so bright that it almost hurts your eyes.

For all of the bad that was real, in the 1980s and 1990s, I also had the sense that any good thing, every good thing, was possible, maybe likely, maybe even certain. Who I have become, and who I am becoming, lived inside that skinny, stubborn, nervous, mouthy kid, in the same sense that he still lives, in some way, inside of me now. I don’t want to return to 1987 or 1991 or 1995 and definitely do not, will not, cannot return to that way of being, as I know that today is always my best day, but that resolve and that energy and that optimism, however clouded and hamstrung years ago, those are things that are worth preserving and worth remembering.

Bruce Cockburn and Jackson Browne are worth remembering, too. Dan Hedaya and purple parachute pants, not at all.