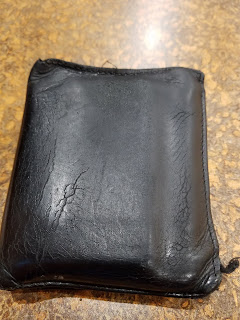 I have realized that it’s time to replace my wallet. I usually get what I pay for, up to a point, and I don’t usually pay for the nonsense beyond that point, like someone else’s name, but this wallet was free.

I was in the Wilson’s Leather Goods store at the Concord Mall in Wilmington, Delaware a few months before it closed. I wish that I knew what year that was. It turns out that not every fact in the world is actually on the Internet and that the customer service reps don’t know, but I think that this was about ten years ago.

I found a wallet that I liked. When I looked through it, I found $30.00 in cash in the back. I tried to turn it in but the sales associates refused to take the money and told me that this happens sometimes, that a guy will move stuff from his wallet into one that he is considering, to see if it all fits, and then decide not to buy the new one but leave some things behind. The price of this wallet was exactly $30.00 there in tax-free Delaware. That’s not the only reason why I bought it, but I suppose that being free made it seem better.

There are Bifold Guys and Trifold Guys and Other Guys. My father always carried trifold wallets (yes, they only have two folds, just like a bifold only has one, but I didn’t invent the terms). I can recall when he would give me cash and how the ends curled in like staples. When my brother carried anything at all, it was usually a money clip with a rubber band around it to hold extra stuff. I have never wanted a money clip but I tried a trifold once and couldn’t do it, too fat and lumpy against my rump. All of my wallets have been bifolds and I will not change.

I recall having a blue nylon wallet in the era of postage stamps that you had to lick. I carried that wallet during a hot summer and wasted a whole book of stamps. Butt sweat is a ferocious thing. Everything since then has been black or dark brown leather.

Wallets used to come with thin plastic accordion-style inserts to hold pictures. It still might make sense to carry a picture or two but for the most part, phones have replaced this function. Those inserts were no good for credit cards, as the card would emboss your number in the plastic, something to consider when you had to discard the broken insert. They didn’t last long.

I used to carry tools in my wallet. Many companies make card-size steel multi-tools. Screwdrivers and wrenches make sense and a bottle opener can be essential, but I have seen saws on these tools. I can’t imagine what I’m going to cut down with a one-inch saw. I’m just not that patient. I haven’t carried one of these tools for a long time, as the manufacturers get carried away in other regards, and the tools get to be too heavy and too big.

Even the best wallet can be too hot and uncomfortable. Read the part above about the ferocity of butt sweat if you doubt me. I have enough information in my phone to identify me in an emergency. When I drive, my wallet is on the front passenger seat or in the console. It’s more comfortable that way and easier to access if I need something from it.

I’ve never carried a condom in my wallet. Again, the problems are bulk and heat, which degrades them over time, and I never understood this concept, either. Having a bottle opener makes sense, in case of an emergency ethanol beverage, but I don’t believe that there is any such thing as emergency intercourse. If I have to explain this, you should return to your Pokemon and remember that you read a post which is clearly about Guy Stuff, then forget the whole thing.

I probably carry too much Guy Stuff, and that is something to consider as I make this change. The biggest problem is customer and membership cards. As it is, Google tracks my visits to the library, the date of my last visit and when I arrived and left, with the GPS feature on my phone. A store using geofencing will be alerted to your entrance through your phone, and they can track your path through the store and see how long you spend in any particular place. The bottom line is that unless I want to leave my phone in my car and pay with only cash, I’m probably generating data that the store can use, and it’s not really private, my interaction with a store, so I might as well get some money, in the form of savings, in exchange for what I am giving to the store.

“Everyone” used to “know” that customers go up and down all of the aisles like a typewriter, until an industrial/organizational psychologist actually studied this and found that it’s wrong. Instead, most of us stick to the aisle that goes around a store, called the racetrack, and dip into the aisles that have what we want, then come back out to the racetrack. That’s why stores have end-caps, the displays at the ends of the aisles, and probably why a third racetrack cuts the length of the grocery store where I shop, to double the number of end-caps. Even if you aren’t playing the game, you’re in it.

So this free wallet that I have had for probably about ten years is finally about dead. The threads on the fold have been loose for a few years but now the pocket dividers are tearing out. I’m going to start losing things, and though that would probably be OK in general, these are things with my name and other information on them.

I’m starting to wonder if I really want to carry all of this crap, a question which answers itself. How much of what I carry now do I want to move to the new wallet?

· Dues cards for my Blue Lodge and my Royal Arch chapter

· My membership card for the Colonial Theatre

All of that is in addition to my debit card, credit card, two store credit cards, and my driver’s license and organ donor card. That list looks like my life in a nutshell, and though it may be the point of this post, I’m not sure how I feel about it. I’m carrying a lot of stuff. Most of it seems necessary but some things, like my blood donor card, can probably go into a box on my hall table and come out when I need them.

I’ve had my next wallet for awhile, a Christmas gift from a then-girlfriend. To her credit, it’s a dark brown leather bifold. There’s much to be said for readiness. The new one will protect my chip-enabled debit card from being hacked, the chip being a security technology that had been defeated before it was introduced. I’ll make the switch soon, probably on a weekend, and then throw the old one away. There’s no hurry and no turning back.