Finding the good in normal

From time to time, someone – usually a friend – will describe an event or behavior to me and then ask, “Is that normal?” If you have done that, or are planning to do that, it’s totally cool. Psychology is the study of the human mind, which is preoccupied by normal, and I like the opportunity to be of help outside of my regular job.

I have been wrestling with this concept of normal a fair bit lately, and I have come to realize that my post on it will have to take two parts, the first of which has to be on the good and usefulness of normal. I work or volunteer in four specialties within psychology, and each uses normal in a different way. I want to take you through those uses for normal.

I have had some training in the application of psychology to threat assessment and had some work experience in the area. I am not an expert and not going to claim to be one, but the topic is very important, so it’s where this discussion will start. Most of my ideas are borrowed from Gavin DeBecker and his book The Gift of Fear. I recommend it often and I have asked most of the women to whom I am close to read it at some point.

DeBecker’s central point is that we know when something isn’t right, when a person’s behavior is not typical. That observation makes us afraid, but we often turn off the alarms, tell ourselves that the fear is not right or justified. DeBecker wants us to listen to the fear so that we can protect ourselves.

I love being able to write this next sentence: Bad things and bad people are unusual. Most of the time, most of those around us do not intend us harm. With that assumption, which I believe to be realistic, we can spot the aberrations.

I’m not talking about persons with severe or chronic mental illness. They are more likely to be targets than aggressors.

I'm also not necessarily talking about calling the police, or assuming guilt.

However, I am talking about, and I think that DeBecker is talking about, trusting the suspicion, moving to a safer place.  If you are wrong then no harm done.

We should wonder about the person who seems out of place, the behavior that does not fit the circumstances, the words that are inconsistent with body language. We need to pay extra attention to the person who is paying attention to us, because that person might be sizing us up, or waiting for an opportunity to hurt us. We can see that because most people do not stare at others. We can spot the person who has spotted us.

We can say no or walk away if we feel scared.  We don't owe anyone a yes or our presence.

There are some normal behaviors that we learn, too. For example, I know that a woman who is in a parking garage is on high alert for danger, so I am going to give her extra space as a way to communicate to her that I am not a threat. I’m not, but it’s also important to me not to scare her. If I see that she dropped her phone, say, in that parking garage then I am going to call her attention to it from far away and then immediately and quickly head off in another direction, even if I don’t want to go that way, because I want to act in a way that is not threatening. That is normal and any man who doesn’t act that way is, at best, clueless or, at worst, malicious. Either way, get away.

In fact, DeBecker says that if you ever need help from a stranger then you should chose the person whom you want to help you, because it’s unlikely that you will choose someone who means you harm. On the other hand, if you return to your car in the parking deck and find a flat tire, you should keep your distance from the nearby stranger who “just happens” to have a jack or fix-a-flat handy. That’s not normal.

DeBecker’s book is great, and I’m going to recommend it to you, too, but the short version, here, is simply that we recognize normal and abnormal behavior. When you feel uncomfortable, sort out the reasons later, but in that critical moment, head for safety.

The measurement of most human abilities, including and especially intelligence, is based on an assumption of a normal distribution, which is that most of us are average or somewhere close to it. If you wonder if you are as smart as the next person, you probably are, so all of this will make sense. In a normal distribution, 50% of the scores are above average and 50% are below average and 68% of the scores are close to the average.

I can get psychology-geek on this topic really easily, but instead of that, let’s take a good, specific example. The Wechsler Intelligence Scale for Children, Fifth Edition (Pearson, 2014) is the latest version of a very good instrument for measuring cognitive ability in children aged 6 to 16.

When the authors at Pearson were developing the WISC-V, they gave it to 2,200 children, 200 in each of the 11 age groups. The sample included fair representations of gender and ethnicity and included children from all part of the country.

Let’s pick a subtest, say Block Design, which has been around for a long time. In Block Design, the student is asked to copy visual patterns using colored blocks. It can be fun and the kids usually like it. Let’s say that, in the national sample, the average of the scores for 10 year-olds on Block Design was 12 points. The range of the scores was laid out on the normal curve (also called the bell curve) so a raw score of 12 points for a 10 year-old becomes a scaled score of 10, which is exactly average (the average range is 8 to 12). Add up a bunch of scaled scores for subtests, usually 10 of them on the WISC-V, and convert them again into a standard score for the Full Scale IQ.

Here’s how standard scores look on the normal curve: 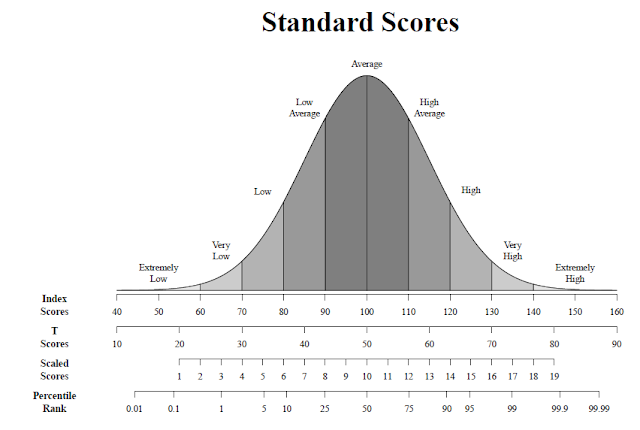 Most of us are right in the middle, from 90 to 110. On the far left, in the sections marked Extremely Low and Very Low, are scores associated with Intellectual Disabilities, just 2% of the population. At the same extreme on the far right, in the sections marked Extremely High and Very High, are scores associated with giftedness, again just 2% of the population. That tells you how rare those levels of ability are.

An exactly average IQ score is 100, but it is calculated from a raw score (points on a subtest) converted into a scaled score (average of your age group on that subtest) and mixed with other subtest scaled scores into an index. If your IQ is 100, and you had missed another question, your IQ would not be 99. An IQ score is a representation of how close your ability is to normal, rather than a sum of points.

It gets way more complicated than this, but that is the short version, and another example of how psychology uses the concept of normal.

In broad terms, a mental illness is an emotion or thought or behavior that is significantly different from what is typical and that causes significant distress or impairment in functioning. Normal kindergartners, especially boys, tend to bounce and to have short attention spans. For a child of this age to have an attention-deficit disorder, the child must have an attention span that is far less than normal and/or an activity level that is far more than normal, for a kindergartner (especially a boy).

What is normal? It’s normal to check on a locked door or a hot stove a few more times than you actually need to do, as long as you aren’t getting into trouble at work for being late because of how much time you spent checking. Weird thoughts, forgetting things, and being grumpy are also normal, as long as they don’t happen often or make you unhappy or interfere with your ability to do what you want to do. If they do then you should go get checked out. If not then don’t worry about it.

That takes me into one more specialization of psychology, with another use for normal. There is a range of normal reactions to abnormal and upsetting events. A person may have disruptions in sleep and appetite and sexual desire (more or less), may feel sad, may have nightmares, may feel tempted to resume previous bad habits like smoking or drinking. It’s normal to have flashbacks and normal to be on high alert. When I was in Alabama for Hurricane Katrina, in September 1995, I had nightmares just from listening to others’ stories, without even having had those experiences myself (vicarious trauma). That was normal.

The human mind is preoccupied with normal. We are still pack animals and survival means fitting in. Belonging is a basic human psychological need, too. The study of the human mind uses normal as a benchmark for knowing what constitutes a problem and when everything is OK or close enough to it. There are some problems with normal, too, and I will get to them next.

De Becker, G. (1997). The gift of fear and other survival signals that protect us from violence. New York: Dell.