Mindfulness on the gun range 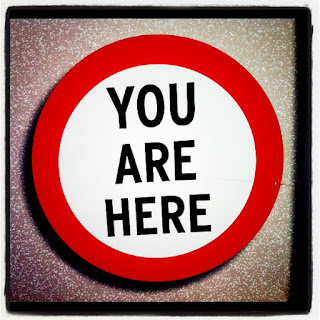 "That's exactly where you are" by Satish Krishnamurthy
https://creativecommons.org/licenses/by/2.0/

I get it, there are few topics more polarized and politicized than anything pertaining to guns. I conceal my politics at the range and I conceal any guns anywhere, but this post is not about any of the controversial stuff. Please bear with me, because I want to tell you about how I experience mindfulness on the gun range.

Mindfulness is a popular topic right now. The term refers to being fully aware of your present circumstances and your actions, aware of but detached from your thoughts and feelings and not judging them. In a mindful state, your whole world is where you are and what you are doing. It is both intense and relaxing. If you read this whole post, you will see why it fits being on a gun range so perfectly, and you are going to wish that the drivers who share the afternoon commute with you were more mindful, and for the same reasons.

A gun range is an intense sensory experience. You might notice the smell first, exactly like a fireworks display but concentrated into thousands of square feet on one floor instead of dozens of open acres. You will probably notice, and feel, the sound next. Each shot is a concussion, again like a fireworks display but much closer, which you feel in your air-filled organs, your lungs and stomach and intestines, especially shots from the big, powerful guns.

A gun range is warm. Regardless of the season, I have learned to wear wicking synthetic t-shirts, the same ones that I wear hiking. There is a breeze, strong enough to move a poster, moving from the rear of the range toward the front. It’s not there to cool you. That air current moves the gases produced by all of that burning gunpowder safely away from the shooters.

There are two sets of doors to a good range, creating a space between the outer room and the range. Hearing and vision protection – “eyes and ears” – are required on the range, should be on before you enter the middle room. Modern corrective lenses are probably strong enough to protect your eyes but this is not the time to go cheap on anything. I wear ear muffs that cover my whole ears, a type with good reviews made by a reputable manufacturer. Even one unprotected shot nearby will leave your ears ringing with temporary damage.

There is no small talk on the range and very little conversation at all. A shooter might come in with a coach or instructor, and if so then when they talk, they will stand very close together. From five or six feet away, which is more than close enough on a range, the conversation will be recognizable as human voices but you can’t make out the words.

The only other person who might talk on a range is the safety officer, and if this person talks to you then there is a problem. There are no minor problems on a gun range. Everything there can cripple or kill you.

There are four rules of gun safety:

1. Treat every gun as though it is loaded until you prove otherwise. You thinking that your gun is unloaded doesn’t mean anything to me. As far as I’m concerned, your gun is always loaded.

2. Never point a gun at something that you don’t want to kill or destroy. Yes, these rules overlap, for good reason.

3. Keep your finger off the trigger and out of the trigger guard until you are ready to shoot. Depending on the gun, it can take as little as five pounds of pressure to fire a gun. It’s easy to make a loaded gun shoot. That’s by design, not defect.

4. Check your environment before you shoot. This one is usually written as “Check the background” but that is meant for hunters. On a range, the background is safe, but it pays to make sure that your lane is clear of things that might trip you, like spent shells, before you start to shoot.

The safety officer is there to enforce these rules, and any other rules, using the officer’s own best judgment. The range is not a democracy and there is no room for debate. When putting away a gun that I had just shot during a visit a few months ago, the officer approached me and said, “I know that your gun is clear (empty) because I watched you clear (check) it, but then you let the muzzle (barrel) point to the rear before putting it away. I’m probably being a (hard-nose) but don’t do that again.” I agreed with him on all points, and the gun was safe, but I was wrong and it would be a bad habit, so I thanked him and nodded agreement. Letting a muzzle point at someone, called “sweeping,” is very bad. Remember that you don’t know that my gun is clear, should not assume my carefulness, and sweeping you is a necessary precursor to shooting you. The bullet doesn’t know that it was a mistake.

Being swept is understandably upsetting, and that is a problem – again, there are no minor problems – in a place where everyone is armed. Most of the shooters on a range are regular guys but you don’t know who is next to you. Everything there can cripple or kill you.

So, there I am, in this place of warmth and concussions and intense smells but muffled sounds and very little conversation, using dangerous machines which I understand well enough to use safely and competently. I am not scared, but I am alert, like I am in a parking garage alone at night or on a darkened and quiet street. I move slowly and deliberately, completely focused on what I am doing at the moment. Those concussions? The shooter in the next lane might have a hand cannon but when I am shooting, I can give no thought to his shots. My whole world is my sight picture, the feeling of the gun in hands, my breathing, the hole that I just created in the target. I’m not always sure of how many shots I have fired or how many I have left, but it doesn’t matter because I know how the gun will change when it is empty, and my finger is away from the trigger until I am ready to shoot, and the gun is always pointed downrange, so the worst outcome is pulling the trigger and hearing “click” instead of “bang.” There is no television or radio on a gun range, no cell phones allowed, no distractions welcome. For the hour or so that I am there, my whole world is what I am doing in the moment, a series of slow and deliberate actions to produce an immediate result. I am completely alert, fully aware.

That is how I experience mindfulness on the gun range, and why, and with the danger that a 3,500-pound missile poses on the highway, I wish that nearby drivers could be focused on the moment, on their knowing and deliberate actions. Going to the range is intense and relaxing all at the same time. It is a place where I experience mindfulness.