Evil and the double-effect 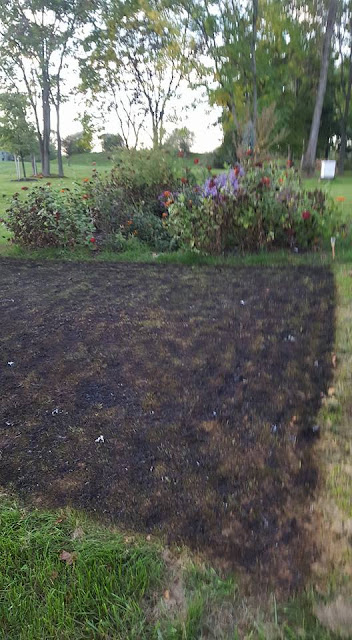 The existing way station and the land prepared for the expansion.
Photo by Brendan Hickey

I did a lot of killing last week – thousands of organisms, to put a ballpark number on it. They were grass plants, doing exactly what grass should do as part of a church lawn. They couldn’t get much more innocent. They weren’t even in a walkway or other place that would make them “weeds.” They were right where they belonged, doing what they were supposed to do, and I came along with a flamethrower and I burned them to death.

Don’t get me wrong. I’m not consumed with guilt here, and part of that is because of the double-effect that is the topic of this post. You might think, “They were also grass plants, not puppies,” and sure that has something to do with it, but they were righteous and alive and now they are dead. If you loved that particular patch of grass then what I did was evil. From the perspective of the plants themselves (yes, we are stretching this but please stay with me for a few more paragraphs) then what I did was pure evil, and we all judge good and evil from our own perspective in our own moment.

I killed those plants because they occupied the 150 or so square feet of land that I intend to use to expand a way station for monarch butterflies, an endangered species whose numbers have dropped by 80% since the 1980s. The addition – more milkweed, more pollinator-friendly flowering plants – will also provide more support for the church’s hive of honeybees, themselves also endangered. That is the other half of the double-effect and why I am not consumed by guilt over this mass-killing by fire. I’m taking a Utilitarian ethics perspective and acting in the belief that the greater good, replacing non-endangered plants with other plants that will, I hope, help to prevent the extinction of honeybees and monarch butterflies which, by the way, will promote the continued survival of humanity, is the right course of action. The lives of the bees and the butterflies are more important than that of the grass plants and so I believe that I have acted morally, even though I have killed thousands of plants.

How do good and evil co-exist, in the same place at the same time? That’s the problem of evil and it drives a lot of potential believers out of the church. God is good and perfect and powerful and loves humans and intervenes routinely in the world but evil somehow still exists and how is that possible? Those of us inside the church harm the church when we pretend to have this one figured out. It’s a wound that we should not hide. Some thinkers whom I respect do not believe that anyone can solve the problem of evil. I think that we can mitigate it a bit, at least ease the pain of it some.

For a long time, I have patched together a partial solution with the idea of a perfect but limited God who, for example, can’t do things that are contrary to God’s nature, like anything irrational, or evil, or contrary to the rules that God has set, like the supremacy of human free will. I have chosen to believe in a God who can turn shit into roses. This patchwork doesn’t cover everything and I’m not trying to sell something to the reader, so I am not going to claim to have it all figured out. I’m not running for president.

Lately, though, I have added the patch of double-effect to my quilt and I like it, as much as I am apt to like anything related to evil. Double-effect says that if you do something which can have both good and evil effects, and you intend only the good effect, then you are not morally responsible for the evil.

Double-effect even applies in law. Should you ever find yourself in a crowd when someone tosses an explosive your way, an unlikely circumstance to be sure, and you throw the explosive into a different part of the crowd where it kills others, you are not legally responsible for those deaths. Instead, the murder charges will be against the person who originally threw the explosive at you. I have no problem with the law on this point but morally, the persons in the other part of the crowd had as much right to live as those in my part, no difference at all. We would call it heroic selflessness if those in my section decided to die rather than allow the death of those in the other section, but there won’t be time for a vote. Throwing the explosive away from myself is protected under the principle and right of self-defense, and the killing of others is an unintended effect. The best option would be to throw it back at the original thrower and blow him up. If I can throw it into a lake or another unoccupied or safer place or direction then I should do that instead of throwing it into a different part of the crowd.

We often apply double-effect to the work of doctors and nurses in cancer wards. We accept that the high dose of morphine that takes away the pain also depresses respiration and accelerates death but we know that the intent is purely palliative, not homicidal, and so the doctor or nurse is not even investigated, much less charged with a crime. Roman Catholic nuns working as nurses do this. We believe in the good intent and accept the double effect. It would be nice if she could take away the pain without hastening death but within the rules of how the body works and how the drug works, it’s not possible and so she has to do her best with what she has.

I think that double-effect applies to God as well. Bad things happen, to good and bad people alike, and those happenings are judged from the individual perspective within the immediate context. I am wary of ex post facto revelation, when we see something of how a particular isolated sequence plays out and determine that we can see God in it, like the death that leads to an organ donation that saves lives. That is not faith. Faith sees God through tears, in the deepest darkness, with eyes stinging from sweat and blinded by blood and clenched shut in agony. Faith believes that there is a larger perspective in which this event, which seems evil in this moment and from this viewpoint, and may truly be evil, is nevertheless also good in a moment and from a perspective unavailable, now and perhaps forever, to the person who suffers. Faith says, “Not my will, but yours, God.”

If this post were a sermon, and maybe it is, then I might make the cheesy hermeutical move about how sometimes we get burned in life or maybe something simplistic but beautiful about butterflies, etc etc. Whatever. I don’t like killing, whether it’s the grass on the church lawn or the spider that innocently wandered into my bedroom and my phobias. I’m not always sure that God exists though I think that I believe it at least most of the time. I know that fear sucks and pain sucks and both are signs of engagement in life even as both are also slow death and so I believe that God calls us away from them into love and courage and faith. I would expand the way station without killing the grass if I could but I believe that those 150 square feet are going to be beautiful and full of bees and butterflies and hummingbirds next summer.