Wandering in the butterfly garden 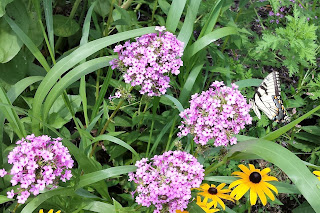 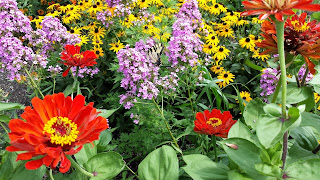 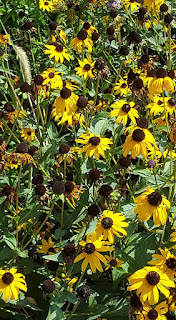 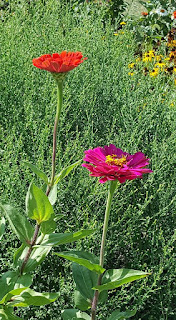 School has been back for almost four weeks. There isn’t a day with a high above 75 in the forecast. Even the official date has come. The season has changed and summer is over.

Out at the eastern edge of the church, there has been change, too. It’s come to be known as “the butterfly garden” and I like that, too, as it kind of suggests that we are growing butterflies, which we might be, but I still call it the waystation. The monarch butterfly population has declined by 80% since the 1980’s and much of that loss has been because of habit loss, so the garden/waystation was meant to be an island where migrating monarch butterflies can rest and eat and leave cocoons.

It has become far more than that. We placed it near the beehive intentionally, as a place that the pollinators could share, and the honeybees, also endangered, have found it. So have several types of butterfly besides monarchs. So have hummingbirds. 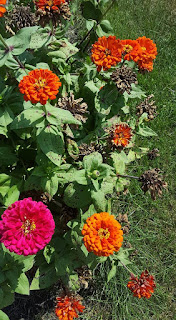 It also became a riot of color. When I thought of milkweed, I imagined a tall and bland grass, like a milky weed, like you might see in a meadow or on a dune, and I was satisfied to offer the monarchs what they wanted. However, the little waystation popped with oranges and reds and purples and yellows. Even if the pollinators had not found it, which is a miraculous process all by itself, the garden became a place of beauty during the summer, valuable unto itself. 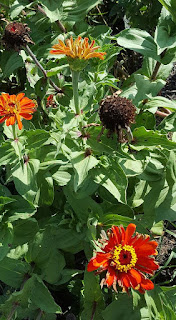 Now, some of those colors remain but they have been joined by increasing patches of brown. Most of the flowers have finished their work and retired for the season. If you visit and wander the roughly cross-shaped path through the middle then you might find company in monarchs and honeybees, but they have also done their work for the summer and noticed the snap of chilly morning and turned their attention to getting ready for winter.

There are a few lessons in the first year of the waystation. As we prepare for winter, it’s time to learn what the garden and the summer have to teach. This time around I am reminded of “Lovers in a Dangerous Time” from Bruce Cockburn: “Nothing worth having comes without some kind of fight/Got to kick at the darkness ‘til it bleeds daylight.”

Permanence is one of humanity’s favorite false gods. It promises predictability, stability, safety – control, or at least the illusion of these. Change terrifies humans and even the best of us often hate change in return.

There is no cause so popular or righteous that it can be taken up without resistance, no resource so tiny that none would fight over its disposition and allocation, especially when change is involved. Romans 5:20 tells us that where sin increased, grace increased even more. In the United Methodist tradition, the will of God can be discerned by comparing a particular event or action to four standards: Scripture, tradition, authority, and one’s own reason. In the contemplative traditions, a revelation of God’s will provokes the complementary emotional reactions of intense joy and deep peace.

I suggest that where grace increases, sin also increases, not enough to drown the grace but certainly in a natural effort toward some kind of equilibrium. I believe that good triumphs in the end, but that does not mean that evil won’t put up a fight.

So I think that we set ourselves up for disappointment, injury, failure if we naively assume that our pure hearts and benevolent actions will assure us of safe passage and unanimous support when we propose any kind of new endeavor. Further, I suggest that resistance is, like joy and peace, a sign that we are doing what is right, doing what we are called to do by God, but to be certain, we should look at who opposes us and why and how. If we are opposed by persons of good will and character who are correcting us gently then we should reconsider long and prayerfully and listen deeply before continuing.

At the same thing that a project stirs resistance, it will inevitably also rouse support, and we can learn something about what we propose to do by who joins us and why and how. If those persons of good will and character have rallied to our aid then we should continue to listen deeply, but we should keep moving on our intended course. That support is also a revelation of God’s will.

The creation is not done.  The world is still being built, is still unfolding, and so we are called to continue the work.  We have mapped out an expansion of the garden/waystation, cut the grass as short as the mower will go so that the flamethrower has the best chance of killing it. After that, we will loosen the soil with a broadfork, then put down layers of cardboard, straw, and mulch so that the freezes and thaws of winter will enrich the soil for spring. Next summer, our local pollinators will find about twice as many flowers to visit, and for the humans, there will be a bench, along with more paths to make weeding and watering and wandering easy. It’s a good place and we are going to make it a bit better. We know how to do that now.