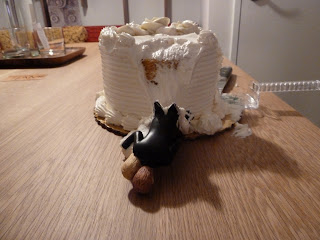 
The judge signed the decree on my divorce two years ago on September 22. I received a copy of the order a week later. It is an odd anniversary.

I know that controversy and acrimony are exciting and draw attention. Even if I felt that way toward my ex-wife, it would be a private matter, nothing that I would post on my blog. I also know that many persons use their blogs as a place to vent about perceived harm and injustice done to them, expecting sympathy. A conspiracy of young ravens was founded as a place where dignity and honor are the rule, and I will not dishonor myself or someone else, so this will probably be a boring post. However, if you have also had the experience of divorce then perhaps you will see that experience in mine.

I don’t think of myself as a “divorced person” in the same way that, for nine years, I thought of myself as a “married person.” I can’t say “divorce” without hearing “failure” and regardless of who is to blame for what and how much, that is what happened. The marriage failed. I certainly meant what I said at the front of the church on that day in December and I made promises that I will not keep, so yes, it is a failure.

I did not want the divorce, though I know that I needed it. The marriage had been a beautiful and vibrant living thing but it, not my ex-wife, had become diseased and ugly and dead and dangerous and so it had to be removed. There was some phantom pain, some phantom marriage, for awhile.

Two years later, I live in a place that is usually quieter and darker and more cluttered that any place that I would have shared with her, in a town that I never would have shared with her, going to a job that I never would have had, studying for a degree that I probably would not have sought. I am a Mason now, 32nd degree, with brothers in my lodge and across the world and throughout time. I am active in a church that I never would have found, either, and the people there are part of my family as well. I don’t look exactly the same, either, with a beard that I have never grown before, not sure how long I will let it grow but I like it. Things are good. Life makes sense, as much as it ever does.

We were married for nine years, together for most of eight, and then the years before, knowing about each other and then knowing each other and then flirting, dating, and engagement. I can remember some of our first date. I remember smiling so much on our wedding day that my face hurt. There were some really good times and it seems strange to me that I can spend that much of my life, perhaps a decade, with a person and then never see her again, but that’s likely to be what happens. There is nothing left between us to say, and so I wish her well, hope that she has a good and happy life.

Maybe next year, September 22nd will pass without notice. If not then probably the next year. There are other dates associated with pain and they blend into the calendar after enough time and lessons learned.