Meditations on a Wawa 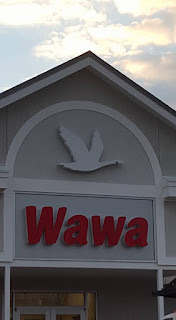 About a year ago, I shared a few meals and conversations with a woman who came to the Philadelphia area from Texas by way of Washington, D.C.  If that doesn’t strip your cultural gears then nothing will, and it did in her case.  In one of those conversations, she expressed confusion, to the point of outright skepticism, about our affection for Wawa stores, and why her realtor had been so enthusiastic about the Wawa being within walking distance of the apartment that my acquaintance had rented.  I tried to explain but found that my explanation failed – not merely in the ears of the belle from Texas, which is like a whole other country – and Washington, D.C., a locale which defies any understanding – but also my own.  Why do we like Wawa so much?

I came to my own fondness later in life than many.  I first realized the distinctiveness of this establishment while living in Richmond, Virginia (yet another planet unto itself) in the early 1990’s.  I went there as a United Methodist missionary but stayed for two more years in what would become merely my inaugural tour of graduate school.  While at the Presbyterian School of Christian Education, I had a conversation about home with a woman who was originally from Georgia (Planet Georgia, it seems, based on the emerging themes in this post) but had done her undergraduate work at a school in Philadelphia.

Yes, among all of the things that we could have discussed, we included a chain of convenience stores.  Such is the Wawa mystique.  This is also when I discovered the Wawa Laugh Test.  Though the capacity to effectively and efficiently and correctly order a cheesesteak is a sure test of a Philadelphian, or not, the inclination to laugh at the name “Wawa” positively delineates natives of the Delaware Valley (what valley and why Delaware is another tale for another time) from the rest of the world.  Respect or not, reverence or not, the name simply doesn’t sound funny to anyone from this region, but apparently it does to everyone else.

Why are we so fond of Wawa?  I suspect that the name is among the reasons and it is an excellent place to start.

Wawa stores take their name from the name of the town in which the headquarters are located.  Wawa is a town in Delaware County, a bit south/west of Media, along U. S. Route 1.  Because there is always a reason to argue, we could make a good argument that the site of the former Franklin Mint is in Wawa.  The town shares a ZIP Code with Media and with Elwyn, 19063.  That’s it.  That’s the name.

Wawa is not correctly written in all caps, as an acronym, any more than, say PAOLI would be.  It is not correctly written as WaWa, either, thus becoming a bizarre and indeterminate grammatical form, as though DoylesTown or ConShohocKen made any sense.  Despite the insistence of some on the other side of the Delaware River, Wawa is also not correctly referred to as “the Wa” no matter how close to and/or symbiotic it might be with a local Y.  These are all common corruptions of the name.

So, the name Wawa, which might sound silly, I don’t know, is probably part of the hometown allure of this chain.  Another part is our history of local retail chains.

I am old enough to remember Gimbels, though not much about it, other than a sense of it being a lower-end department store.  It was the first old Philadelphia department store chain to fold.

Wanamaker’s, the top end, with its flagship near City Hall, home to the Wanamaker eagle, where generations agreed to meet before cell phones, and the largest indoor pipe organ in the world, and a famous Christmas music and light show, was next.  John Wanamaker was a Mason and once Right Worshipful Grand Master of the Grand Lodge of Pennsylvania, the lodge headquartered at One North Broad Street and founded by Benjamin Franklin, by the way.

The last chain to fold was Strawbridge and Clothier, with its chain of discount stores called Clover.  I worked at Strawbridge and Clothier full-time in its last year, in the men’s dress furnishings department of the store in Exton Square Mall, from 1995 to 1996, then part-time for the next five years at the store as owned by May Company, which truncated the name to Strawbridge’s but had the sense to keep that much, rather than using the name Hecht’s as in other markets.  It wouldn’t work in the Delaware Valley.

Wawa to Benjamin Franklin to Strawbridge’s in two paragraphs?  Yes, that is the Philadelphia way.  We love our hometown brands and Wawa is the last survivor of that era and another reason why we love it.  Wawa is our home team, one that wins and doesn’t seem to make bad trades.

For all of that, it is hard to believe that the chain opened its first store on April 16, 1964, in Folsom, Delaware County.    You might think that Wawa had been around forever.  It feels that way.

In fact, those are our neighbors behind the counter and folks get a bit touchy.  No matter how long the line, do not EVER risk a complaint about the staff.  Better that you should roam the Linc wearing a Cowboys jersey with snow on the ground, which at least would not be personal.

In fact, Wawa is a good job and a source of pride in this area.  You might be embarrassed to sling Slurpies but anyone who makes a Shorti can stand tall.  That headquarters in Delaware County includes a corporate university.  Wawa can be a job or it can be a career and either will earn you respect.  The movie “Clerks” was filmed in New Jersey for a good reason.  Kevin Smith couldn’t set that movie at Wawa.

Wawa earns that respect, too.  The coffee is always good, the gas prices are always fair, and the PNC ATM will not charge you a fee.  The bathrooms are clean and the stores are safe, but more than that, Wawa keeps going when the weather turns to hell.  If you can make it to Wawa, it will be open for you but, straight up, when Wawa is closed then you should stay home.  The water is too high or the snow is too deep and supporting the patrols and service crews has become too dangerous.  When the weather is too much for Wawa, it’s too much for everyone.  I don’t even know what makes a 7-11 close.  Maybe fog.

The one place where it is fair to knock Wawa is in the parking lots.  Whether it’s a small, older, inner-ring store like Morton, or a Super Wawa with gas pumps in West Chester, a Wawa parking lot can be a tricky, dangerous place.  I once mutually rear-ended a Saturn at Wawa.  I didn’t see him, even after we collided, but I was backing into the morning sun and couldn't see much.  In that respect, I am glad that I hit a Saturn and not a child.  I don’t know what he was looking at, perhaps his spoiler, which has no business being on a Saturn.  With only a small dent beside the spare tire on my RAV4 and his stupid spoiler being cracked, we shook hands and agreed to let it go.

I have seen outright collisions, right in front of police, at Wawa, and I have seen road rage in the gas lanes.  Driving in a Wawa on a weekday morning is a risky adventure but I don’t think that Wawa can do much about it.

However, I do think that PennDOT should make the best of it and rent out a few Wawa stores for driver’s tests.  I’ve been driving for 30 years and I don’t care if you can parallel park.  I really can’t.  I need space equal to that for a 747 – on a good day, enough to park one, but on a bad day, enough to land one.  It just means that I walk more, no big deal.  If you respect school buses and crosswalks, use your turn signals, can drive from 30 MPH to 45 MPH in the snow, turn on your lights at dark and in rain and snow and fog, and can drive in a Wawa parking lot at 7:30 on Monday morning then you can share the road with me.

So, PennDOT should make a deal, designate a few Wawa stores.  PennDOT picks up half of the tab for any customer who visits from 7 to 8:45 on a weekday morning and makes new drivers demonstrate their proficiency there.  Might as well make the best of it, and again, really, if you can drive effectively and safely in a Wawa parking lot at morning rush hour then you can drive with me, even circle the block a few times with me.

I think that these are the reasons why we like/respect/support Wawa, though loving a store is probably still taking it a step too far.  Wawa is our home team, the Wanamaker’s of convenience stores.  You can meet me by the goose any time.